This blog has moved

In case you're wondering ... this blog has moved to http://cynfern.wordpress.com/
Posted by Anonymous at 12:11 AM 1 comment:

Fun with PhotoBooth
Posted by Anonymous at 2:27 PM No comments:

Why I love estate sales

Only at an estate sale could you stumble across a treasure trove of department store mannequins in a backyard gazebo. No, I didn't buy any. I am a collector, but sometimes getting pics is enough.

I started going to estate sales in Kansas City with my office pal Pam. She was an old hand at it. She taught me how to do a quick cruise of a full house, how to recycle and reuse.

I still have a couple of nice '50s swing coats that I picked up at KC estate sales. That's also when I developed a fondness for vintage hats and linens.

One of my most treasured finds at a KC estate sale was a collection of three old pattern books (McCalls, Simplicity) at the home of an elderly woman (deceased) who had obviously been an avid seamstress. One of them was from the 1920s; it was filled with flapper dresses, middys and bloomers. Another was from the late '40s, with suits that looked like they came out of a Katherine Hepburn movie. The third one was from the early 1950s; it featured lots of wasp-waisted, full-skirted dresses ... shades of Doris Day.

I still scan the estate sale listings for mentions of "fabric" and "sewing." I've never found any more old pattern books, but I once in a while I find some wonderful vintage patterns. At 10, 25 or 50 cents a pop, they're a cheap to collect and a fun find. I think of them as my "baseball cards."

A stroll through computer history

The best way to visit the Computer History Museum is with someone who worked on early computers. That's what I did last week when my favorite uncle, Jordan Spofford, and my Aunt Bev were in town for a few days.

I enjoyed seeing the Apple computer prototype, but my uncle (at left) got most excited about seeing the Cray computer and a reproduction of the Babbage Engine, the first automatic computing machine. I'd never heard of the Babbage before, but he knew all about it.

My uncle worked at Western Electric in Massachusetts in the early days of computing. Here's a photo of him testing the wiring in the D2 computer bay at Western Electric. (He said Hughes Aircraft made the test equipment they used back then.)

This pic shows my uncle and me, reflected in the glass covering over the wiring of the Cray computer.

Alzheimer's came to my door last night, and I let her in.

She was wearing pink flowered pajamas topped by a green V-neck sweater. She was standing at the end of my driveway, after ringing the doorbell at 1:30 a.m. From a distance, her blondish page boy hair reminded me of a friend.

"Pat?" I asked from the doorway.

"No," the woman replied, turning toward me, but remaining at the end of the drive. I walked out to meet her, tugging my bathrobe close against the cold.

She was frail, much shorter than my friend Pat, maybe five-foot-two. She said she'd been driving a friend home and had gotten confused. Her car had run out of gas and she'd been walking for a while around trying to find her way home.

I said we'd figure it out and led her inside. She said her feet were cold. I looked down and saw she was barefoot. I sat her down in the family room and went to get her a pair of socks -- a pair of thick, warm woolen ones. As she slowly tugged them on, I asked if her car was nearby. She didn't know. How about her address? She couldn't tell me. Anyone we could call to help? No answer. Her name? That she could tell me, so I looked her up in the phone book and found she lived just three blocks away.

My husband and I took her out to the car and drove a few blocks, then started looking for her address. She gave no sign of recognition, no "That's my house!" I got out with a flashlight so I could read the house numbers. According to the phone book, this was her house. There was one light on inside. I tried the door. Locked. I rang the bell. No response. A car parked on the street directly in front of the house was also locked.

I went back to the car. She was still sitting quietly in the back seat. What next?

"I think we should take her to the emergency room," my husband said. It was either that or call the police.

The emergency area was quiet. I asked her to take a seat in the waiting area while I talked to the admittance clerk, who had a hard time figuring out our relationship.

"No, I'm not related," I told him. "I think she lives in my neighborhood, but never met her until she rang my doorbell about half an hour ago."

Another young man -- a nurse, a doctor? -- came out and asked her some questions. Did she know what day of the week it was? Could she give him the name of a family member to call? Did she know what year it was? No, no and no.

"How old are you?" the young man asked.

She followed him without protest into the hospital, and my husband and I drove home.
Posted by Anonymous at 9:16 AM 5 comments:

Is it art ... or appropriation? Creativity or theft?

Take a look at the web's latest phenom, Kutiman, who makes music videos by mashing up and remixing short clips of other people's YouTube videos.

Daniel Sinker, a member of the journalism faculty at Columbia College in Chicago, comes down on the side of art. So do I.

In a recent Huffington Post piece, Sinker said, "If your reaction to this crate of magic is 'Hm. I wonder how we'd go about suing someone who did this' ... instead of, 'Holy crap, clearly, this is the freaking future of entertainment,' it's probably time to put some ramen on your Visa and start making stuff up for your LinkedIn page."

Perhaps the Associated Press might want to consider taking that advice. Instead of acting like RIAA gestapo and suing Shepard Fairey for "copying" an AP photographer's campaign photo for his now-iconic Obama "Hope" poster, the AP might want to consider adopting similar techniques instead. Instead of regarding Fairey's poster as "a threat to journalism," the AP might want to lighten up and bask in the glow. After all, I doubt anyone would remember that photographer's name, or that photo, if it weren't for Fairey's poster.

I think Kutiman's music ... video ... whatever you want to call it ... is seriously cool and creative. But I also like Sinker's larger point ... that musicians and artists aren't the only ones who can take advantage of the proliferation of raw material on the web. He says journalists should be tapping into that mother lode of material too, instead of viewing the web as a threat.

Sinker advises journalists to "Be like Kutiman: use the millions of blog entries, photos, tweets, and videos that find themselves on the web every day to build something new."
Posted by camccune at 6:05 PM No comments:

Just got a call from my hubby. He's in downtown SF and apparently his car got towed. Bummer!

What next? Is there a BART station nearby? How do you find if your vehicle's been towed ... or stolen? And how do you get it back?

It just took me one Google search and a couple of clicks to find out. Called the SFPD number listed ... yup, it was towed. Got the details, called him back, told him where to go (so to speak).

But I couldn't help thinking ... if he'd had an iPhone, he could have sorted it out without my help.

Yes, I want one! I'll be so glad when my current phone contract expires! 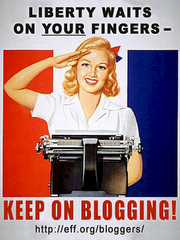